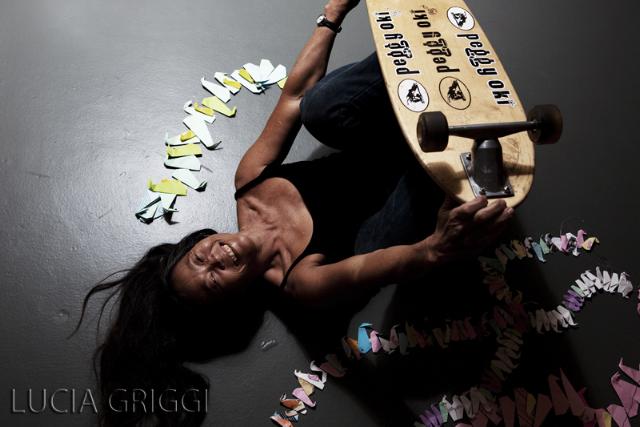 Here’s and interview with Peggy Oki Straight out of· ‘The Skateboard: The Good The Bad And The Gnarly’ Written By Ben Marcus.

When and where did you start skateboarding?

That was a long time ago! I would say at the age of around ten, when my father bought my brother and I our own “Black Knight” skateboards from FedCo, fully equipped with Fred Flintstone (stone-age) rock wheels. We skated around the neighborhood which later was named the Territory of Dogtown.

Can you define what “Dogtown” means? The definitions seem to vary from person to person.

Who influenced/inspired/mentored you as a beginner and then as you progressed?

I knew of no influences as a beginner. As I progressed, it was my Zephyr team mates.

How did your boards change as you progressed?

After the Black Knight, a few years later, my brother made a skateboard for me in his woodshop class at Venice High. It was a small swallowtail, set up with Bennett trucks and Cadillac Wheels. So great to be rolling on urethane! And then I got on the Zephyr team and rode the Zephyr skates, eventually Z-Flex.

Describe the circumstances that lead to you becoming a skater for the Zephyr team.

I had begun surfing at Bay St., and was into practicing down Bicknell Hill on the days without surf. While there, I think it was Jay (Adams) who started talking with me and asked if I would be interested in being on a skateboard team. So I went to the Jeff Ho/Zephyr shop up the road, and “the rest is history.”

When did you join and what was it like being a lady among rogues?

I joined as the team was being formed. Being into motocross racing at the time – also a “tomboy” through my girlhood – it was just another fun thing to have skating adventures with the rogues.

You are kind of the Gidget of skateboard world, in a sense?

Hmmm, I’m not old enough to really know a lot about Gidg, other than Sally Field. Were her parents supportive, or not? 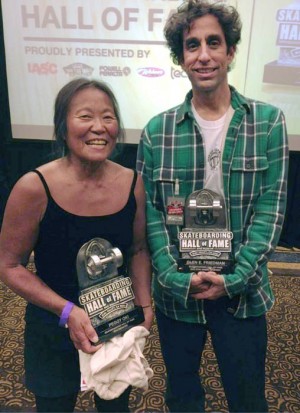 Kathy Kohner’s parents weren’t sure about their teenage daughter coming back from the beach with stories of Moondoggie and the Great Kahoona. But then her dad wrote a popular book that became a popular movie, so I think they were down with it. What about your parents and these rascals you were running around with? Could you bring Tony or Jay home for dinner to meet mom and dad?

My father seemed pretty cool, but my mother never approved of the many tomboy activities. Tony or Jay home for dinner?

What was your specialty as a skateboarder and during the 1970s, were there a lot of other women skateboarding?

The hills were fun for downhill and slalom. I loved skating the banks at the schools. I think that like most of the guys on the team: “tricks are for kids.” I didn’t see any other women skateboarding wherever we went.

When did you start to fade away from skateboarding and hanging out with the Z Boyz/Dogtown crew?

I faded from the scene after the first few contests. From the first, the Del Mar, I didn’t like the politics. It wasn’t always about the best skater, and it wasn’t fun for me to hang around all day, hardly actually skating.

Are you surprised by all the media attention that you all got then and now?

In all the documentaries/movies/stories that have been written and produced, do you see anything that is untrue or that has been left out?

In the documentary, it wasn’t shared that for some unexplained reason, I was not “qualified” for the slalom competition at Del Mar. I was the only girl who made it down the ramp both times in the trials. In the movie, much of the story was fictionalized. Jay’s mother was not as she was portrayed.

Just for the heck of it, let’s play a word association game. I’ll name all these Z Boyz/Dogtowners and you sum them up in a word or a sentence 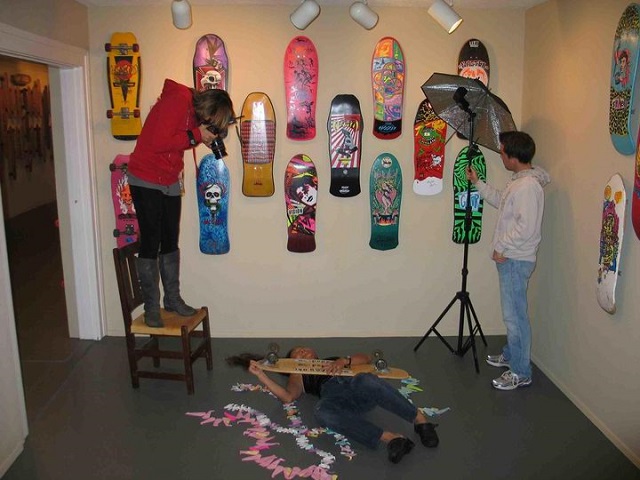 It’s hard for me to play this, but will do what I can. Everyone is a unique individual. And our focus was to skate when together. We didn’t have much discussion to get to know each other personally.

You came to the shoot with origami whales and now you are in Dominica with those whales. What is it you are doing there?

Dominica, the only East Caribbean IWC member nation that does not support Japan’s whaling interests, has recently renewed its commitment to whales. So the Origami Whales Project is currently working with children and conservation groups to create a special Curtain of Origami Whales to remain on exhibit there to symbolize (and hopefully galvanize!) the country’s position of protecting whales. We are planning to coincide this effort with a premier screening in Dominica of “The Cove” (which to date has received 24 awards and is on the Academy Awards nominations “shortlist” for 2009 Best Documentary film) in early 2010. Charles Hambleton, Head of Clandestine Operations for “The Cove”, who I worked with this summer, plans to be here as well. Here is the link to my soon-to-be-posted “blog” page: http://www.peggyoki.com/

How long have you been doing this?

What kind of whales pass through Dominica?

Sometimes Humpbacks and Pilot Whales. The very special thing about Dominica is that there are about five families of sperm whales that spend a lot of time around the waters of Dominica. They are a pelagic species, usually found far from shore in deep ocean environments. So to have them so close to any land is unique. I just so happen to be a “Sperm Whale Groupie”.

I like whales. They go past my house in Malibu sometimes.

My guess is that you see the Gray Whales on their migrations to and from Baja where they are calving and nursing. There are actually lots of other species off the California coast, but generally not seen as close to shore.

Can’t imagine how people can kill them.

Whaling is cruel and unnecessary. If people knew what happens, it would be shocking. There are laws in many “civilized” nations regulating the “humane slaughter” of farm animals. The International Whaling Commission (IWC) has NO regulations on this issue. Sometimes whales may take OVER AN HOUR to die. Due to their highly adapted physiology, it’s actually hard to know when a whale is actually dead.