Truckin from ACS to X Caliber

From The Good, The Rad, and the Gnarly by Ben Marcus. Of all the skateboard truck companies that bubbled up in the 1970s, the three that are still going are Tracker, Independent and Gull Wing. Those companies, their founders and the products get their own sections of this book.

Below is an alphabetical list of some of the many truck companies that flamed up in the 1970s, and then flamed out. There were a lot, but we didn’t get them all. Aficionados will notice there are no Blazer, Megatron, Pittsburgh, Randal, Santana, Track Force, XL-700 trucks or Z-Roller, and there are probably a dozen other companies left out – some of them legit for a time, some of them Mickey Mouse: but we only photographed the trucks on the 70s-era boards photographed by Lucia Griggi. 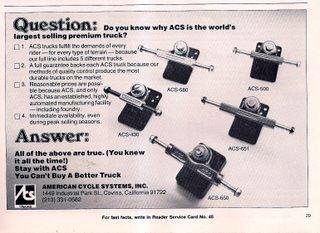 ACS In Skateboard Industry News for Dec/Jan 1977, an ad for ACS explained that American Cycle Systems were “the country’s largest producer of aluminum hubs for bicycles” and they had used their experience in precision-machined casting to deliver 356 aluminum-magnesium alloy heat treated to the T-6 condition. “Against all competition, ACS has became of the world’s largest manufacturer of premium skate-board trucks.” A bold statement, that may or may not have been true, but ACS was (and still is?) a player in a market that would become dominated – in the long run – by Tracker and Independent.

APEX Just as in the 1960s, some of the companies jumping into the skateboard market in the 1970s took the hot car route, instead of the surf route. Apex Sports Products from La Mirada, California, made a line of Super Sport mag wheels for skateboards: “The 100% pure urethane tire gives a smoother, faster, quieter ride and more grip.”

Apex apparently thought their wheels were too hot for all other trucks, so they made their own out of A356-T6 aluminum sand castings. 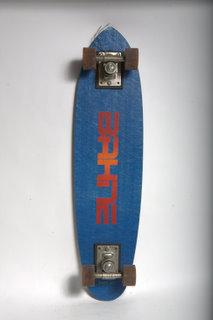 BAHNE Bahne skateboards used basic trucks at first to connect their pultruded decks with Cadillac Wheels. But as the market heated up, Bahne manufactured their own custom-designed trucks at a foundry in Los Angeles.

CAL GX  Another mystery marque, that doesn’t show up in Skateboarder or Skateboard Industry News or anywhere else for that matter.

D-BEAM  Some time in the 1970s, a truck innovator took the “Plastics, Benjamin” thing too far and made skateboard trucks out of nylon. The D-Beam, by all accounts, was not such a great idea. One contemporary skateboard truck exec harrumphed: “Those trucks were ridiculous. Dogtown D-Beam. At that point I lost all of the respect. Strike that. I never actually respected the Dogtown guys, so…. the trucks didn’t work and I felt that if you are going to put your name on something that didn’t work, at least have the guts to call them experimental or funky or something other than a decent replacement for a conventional truck.· Besides that, they broke. I always wondered who in the world was responsible for the design and manufacturing of the D-Beam.” 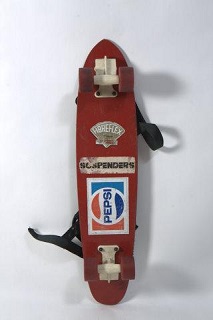 However, Nathan Pratt wasn’t sure about the Dogtown connection: “I haven’t ever seen these before. If they have a ‘Dogtown’ brand on them you would need to contact Jim Muir to find out their history. I seem to remember a ‘Dogtown roller’ brand that was some sort of rip off. It had nothing to do with us.”

Larry Balma, co-founder of Tracker and 70s skateboard truck aficionado said: “They look like the second version of the Mattel truck.· The first one had no post under the beam and when you stood on it they compressed right down to the underside of the deck and the wheels could not even roll.· Can you imagine someone designing and producing a skateboard truck that they never even stood on, not even rode?· They installed the post to hold the axle away from the board after they got our phone calls and the truck would then turn…It was a cheap toy.”

DYNO FIBER-FLEXI  Like Bahne and Makaha and other 1970s skateboard deck manufacturers, Dyno Skateboards of Santa Ana, California found it more economical to manufacture their own “Dyno Flier” trucks. Dyne made a line of Flexi boards from 24 to27” and the complete boards came with Roller Sports Stoker wheels.

GREN TEC According to their ad in Skateboard Industry News from February/March 1978, GT was short for Grentec, and GT stood for Good Times!!!! GT may or may not have stood for Great Trucks as well, but GT boards were another brand of not-entirely-on-the-cool-bus that did well during the Urethane Revolution. 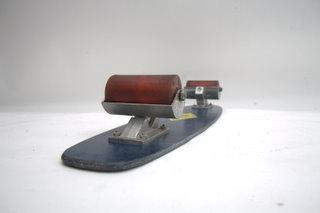 HOBIE SUNDANCER What the @#%@%%? Hobie Skateboards were no longer affiliated with the Hiltons or Vita-Pakt· in the 1970s but Hobie had a thriving team and business that lead to experiments like the Sundancer. Possibly good for applying paint on smooth road surface, but the double-wheel innovation didn’t catch on for some reason.

LAZER  How hot? Lazer hot! Another player making a serious play in the world of 70s skateboard trucks, Lazers could be found under the decks of beginners and pros. 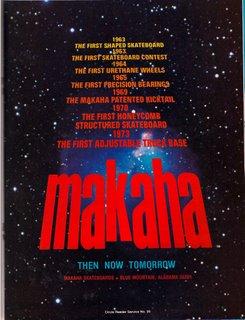 MAKAHA Out of the 1960s and into the 1970s, Makaha Skateboards were still haggling with some elements of the skateboard industry over the patent rights to the kicktail. As this ad claims, in 1973 Makaha patented the first adjustable truck base. Makaha sold a lot of skateboards in the 1970s, and they found it better to manufacture their own trucks then rely on other companies.

NAGEMA  The Germans love an engineering and machining challenge, and in the 1970s, the Nagema company came up with their ideas of how a skateboard should be built.

Note that rubber stopper is on the nose of the board, not the tail. Or maybe that is the tail.

Since it was hard to make heads or tails of this board, it was necessary to contact Konstantin Butz, a German chap who had spent time in California in the spring of 2010, doing research on Skater Punk for his PhD. Dissertation.

We got a good response: You found my favorite board there. It really is odd! Funny, I just saw one of these in a VANS store in Berlin this weekend. I saw it for the first time at SKATELAB in Simi Valley… 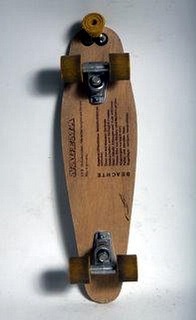 The board is from the German GDR – the German Democratic Republic, aka East Germany. NAGEMA is an acronym that stands for: Nahrungsmittel, Genussmittel, Maschinenbau. That means: Food, Luxury Food, Mechanical Engineering. Now, line by line:

VEB is short for “Volkseigener Betrieb” meaning something like “People’s Enterprise” because, apparently, companies were “owned” by the people in the GDR.

“Schokoladen-Verarbeitungsmachine” means “chocolate manufacturing machines” and Werningerode is the town. So I guess there was a factory that built machines for chocolate production while throwing in a couple of skateboards in between. Hilarious! Socialism rules!

“Befahren öffentlicher Verkehrsflächen verboten” = “Do not use in public traffic.”

That’s it. They give you all these ridiculous instructions, making this poor thing the “uncoolest” skateboard ever and then they put this “brake” to the front, which will just kill you…

Great! I really love this board. Wish I would own one. I really think it’s a perfect example for how it must have been like to be a teenager in the GDR. Rules, rules, rules… 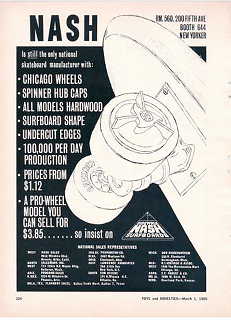 NASH  A stalwart board-maker in the 1960s, Nash was still very much in the game when skateboarding fired back up in the 1970s. They experimented with plastics and other materials, and also fired their own trucks, down there in Texas.

PRO CLASS Pro Class was a company out of Orange, California who rode their equipment hard. In May of 1978, the Pro Class team went to Lion Country Safari in Irvine and rode “a standard Pro Class production line board for 24 hours non-stop, with absolutely no mechanical problems, top that.” We can only assume that board was equipped with Pro Class trucks, similar to this board from the collection of Terry Campion.

ROLLBREIT More fine German engineering from the Rollbreit people. It took six screws to hold these babies in place, as opposed to four for most skateboard trucks beyond the Continent.

X-CALIBER Wasn’t sure about these trucks, at first. There was a skateboard company in the 1970s called Valtee who proudly considered themselves the “Brand X” of skateboarding, and thought this might be them. But few people on earth know 70s skateboard trucks better than Larry Balma who confirmed: “The first X-Calibers in 1974 were a Sure Grip roller skate truck knock off with an X on the top of the hanger.· Much later they made skateboard trucks with their name on top of the hanger.”