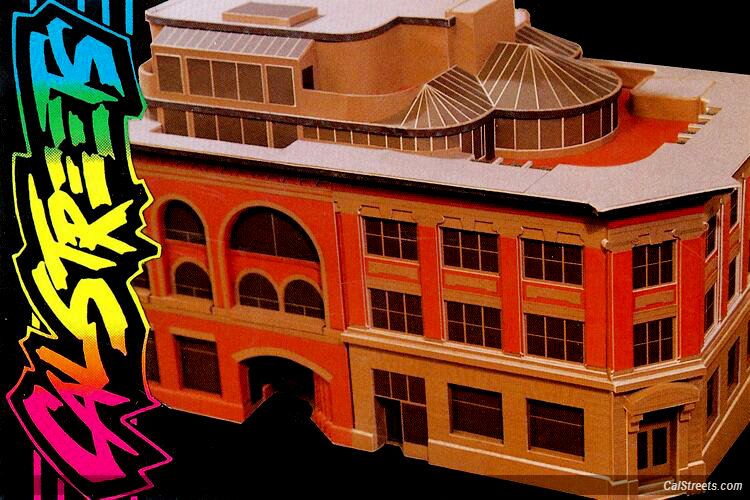 We were given 30 days notice to GET OUT of our 11 Lonsdale Shop, the landlord Smitty kicked us out to open his own skate shop Ground Zero, which failed miserably …. karma rules! We found our New Shop in a 1930 Vintage Bank. This Heritage building was over 3500 square feet and included two walk in safes, and 2 foot thick concrete walls. Contractors ready with the reinforced board wall – It must hold over 1000 DECKS. Craig Oliver, Al Laidman and Greg Wilson ready shop for our grand opening. Empty bank on Wednesday by Saturday Canada’s largest skateboard shop. Grand opening in just 48 hrs. With line ups around the block our staff did an incredible job keeping up with the 100’s of skaters who showed up. Staff Dan Robertson (wheels) Greg Wilson (cash) Warren Wedley (shoes/decks) Trevor Smith (security) Craig Oliver (Grip Tape Specialist) and Chris Jackson on (decks) made this a one of a kind event never realized in retail skateboard history in Canada. Contractors have finished their work. Now to move the small shop up one block. Staff Al, Craig and Greg – Hoping the deck wall can hold all the weight. Airwalks, Sims, Vision everywhere … Grand Opening in 32 hrs. Shop is filling up, deck wall is holding, now the window displays … 24 hrs and counting.Local Motion Surf, Gotcha and Vision Street Wear Classic Art Window Displays finished for grand opening day celebrations.Hired rival radio stations ON LOCATION to fight it out at the CalStreets Grand Opening Day.  AM 1040 On Location with LG73 , what a great promo.  Each station was trying to out do the other with prizes and gifts to our customers. At one point offering concert tickets for any prize the other station had given out.  Listen to our original radio commercials from the 8 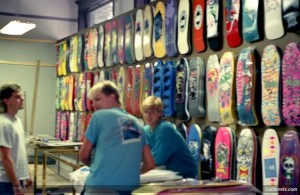 per Banner. Note* The custom grip taped Vision deck in the right corner.

Vintage 1930’s solid steel Bank Vault housed our supply of Vans, Vision Street Wear, Burton, Sims and Airwalks. The Vault also assisted locking up shoplifters, and telling them their is only 30 minutes of air.  So 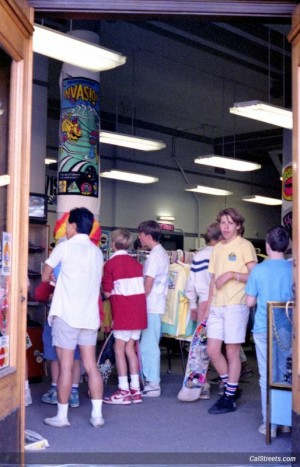 Wide angle view of CalStreets, an awesome picture of our skater run shop.  There is a lineup outside the door and down the block just to get in.  Cash Till view towards crowd show no room in a 3500 sqft shop! I wonder how the other shop did that day ….

With 30 feet of showcase space dedicated to stickers and over 1000 decks on display, Cal Streets was a summer destination for many rural skaters across Canada. Grand Opening Day:  History is made with the Largest Grand Opening of any dedicated skate shop in Canada. LG73 and AM1040 Battle it out on Location at Calstreets North Vancouver. Cal Streets Snowboards “Ice Age Logo”Kemper, Barfoot, Burton, Gnu, Sims Snowboard Room.

Bone Brigade Videos Signed by the Powell Team after store autograph session.  Fashion Never Function – Hip Packs display case very 80’s.  SexWax, Barfoot, Kemper, Body Glove hip packs …. and I still have them in a box!!!  Ebay perhaps…. Our lighted door signage was Spikes favorite vantage point while addressing customers when they entered the shop. Click to Listen to SPIKES meowl from the past. Thanks to the City of North Vancouver for the new marketing promo.  NO SKATEBOARDING  CCNV BYLAW 5798 sign posted by bylaw officer in front of store,  so we made it into Hoodies and Stickers. By Order of North Van City Council. Front Entrance looking towards the workbench. Surf Clothing Isle. Oakley Glasses display, remember Oakley Blades.  Still have the original Oakley case and parts in the Calstreets Vault.

CalStreets Skateboarding is Not a Crime 80’s Sticker. Six dedicated showcases just for our sticker collection. Here is a closeup of the center case . Close up of another stickers showcase, still have these buggers in a box 🙂 Oh found this sticker case photo here.

CSI has these rare Powell Public Domain  and Powell Fun Zone banners on display at our Studio in Vancouver. We also distributed for Delgado Fly Away helmets, as you can see we had 100’s. 92 Lonsdale Wall of 1000 Decks.  Jim Hadden watches over customers from workbench point of view towards Bank Managers Office.

A Harder Act To Follow:  Flyer Ad:  Very 1980’s retail flyer.  The famous CalStreets Slotch watch, we gave away these for every deck sold.  Purchased over 10,000 off of Cam Capozzi’s marketing company.  The CSI vault reveals only 2 slotch watch in our collection and after 30 years they are dried out.  Anybody have a mint one? Surfwear Snowboards Skateboards Windows by Craig. Vintage Heritage Building North Vancouver.

Heritage Building 92 Lonsdale Entrance way . California Streets Flamingo PalmTree Neon Sign Front Door. HISTORY NOTE:  In a horrific accident in the late 1930’s the Bank Managers car lost its brakes on Lonsdale Avenue and crashed into this doorway on his way to work. Unfortunatley the Bank Manager and his wife died at the scene.  I was informed of this incident by an old timer visiting the shop when he used to work here as a bank employee. SexWax BigFoot Vision Hip Packs, Pray for Surf, Bones brigade Videos Shred Till Yer Dead! Powell Team Autograghed Poster.

Troy Payne – Dedicated Manager of North Vancouver location for many years. Surf Skate and Snowboard enthusiast he road for Rocket Snowboard Gear and was infamous on the slopes of Whistler.  Troy was our snowboard tech and was simply the best. CalStreets Hosts the Powell Team for an Autograph Session. We introduced the Triangle CalStreets Security shirts.  The whole Powell team was stoked on our customers and adourned our CSI security shirts.  Now these were never available to the public and are very rare.

The Binge BackStage Pass: Thanks to Simon Oliver, Stephen Oliver, Noel Cormack, Mark Thompkins, and Dangerous Dan and of course Mark Gilmore for bringing us all together for this final Calstreets event. Concert Benefit for Rape Relief Charity featuring The Binge. Don Couchman helps with setup during this impromtu rock event. As the concert picked up both sides of the streets filled with music fans .  The North Shore Health Authority wasn’t too pleased with the volume the Binge liked to play at, so they gave us this warning letter , hey but NO Fine, hey hey. Just call me Fitz.

The Binge BackStage PassCal Streets Authorized Dealer Banner – Crumpled Night Effect .  These original banners were typical 80’s flourescent 2ft x 3ft and only given to our CalStreets dealers across Canada.  We now have these original banners available in a framed print.  These are NOT reprints just check out EBAY.  CalStreets Surf Designs Bitchin Surf Teradactyl. These underground stickers were bootlegged out of a GasTown Apt but were quite a hit.  Cal Streets Snowboard Shop.

From the Vaults of California Streets another board quiver by Rick : Hobie Freestyle Spinners, Sims Experimental, Indy I trucks, Hobie Claw Wheels, Steve Rocco, Gulwing and Vision Blur. CalStreets Ocean View graphic. CalStreets Triangle Key Chain and Keys to my now Vintage 86 Corvette , which has been featured at various Car Shows throughout the lower mainland.

From the Vaults we have Thrasher Magazine Box and Original NEW Tapes – Many in shrink wrap VHS and BETA! This Vintage Vault collection will be donated to the REAL skate Museum which will cover ALL skaters and companies involved in the early roots of the Canadian Skateboard Industry. No BIAS No Bull. Vision All over print shirts

Over the years you get many letters from fans, but this letter was great. Dear Cal Streets: I sold the coupon to my brother. Official Regeneration of CalStreets Industries: Frozen out of the industry by forces beyond our control Calstreets Regeneration: Tribute to CalStreets 2005. Non Competition Guarantees bite.  Thanks for checking out the detail text highlights of the HI Res Vintage CalStreets Gallery.  Rick Tetz Skater Operated.