Interview with Rick Tetz creator CalStreets.com:  What is CALSTREETS Skateshop all about?

1..CalStreets is all about respect for skateboarding and skateboarders. One of the most enjoyable parts of being a skater is the socialization and camaraderie with other skaters. Real old

school point of view but that was the way it was.· This was particularly important when I was competing and skating as part of Team Sims. Without my teammates pushing each other I would never realized my dream of finally winning first in the 1980 Canadian Nationals. I believe skating is about personal freedom and personal responsibility for your actions, not about bean counting and sales. After working for Canada’s largest skateboard distributor, I saw a real lacking in the quality of stores I saw here in Canada (circa 1981).·After visiting ValSurf California (Biggest and Best at the Time) I wanted to make CalStreets a destination, not just a shop.· And with a few whack ideas and hard work CalStreets was born.

“Michael Brooke: Editor Concrete Wave Magazine Blog Quote: “Rick’s shop, Cal Streets has quite a legacy in Vancouver (and beyond!). His shop wasn’t just a skate shop, it was a meca. It was perhaps one of the greatest, most successful skateshops on the planet.

Rick promoted CalStreets with a huge amount of marketing and through an extraordinary amount of hard work and perseverance it became the number 1 skate shop in Canada – but I am getting ahead of myself.”

When the first CalStreets opened, skating was in the early stages of getting popular. The only place that sold boards were places like Sears, and the department stores, where they were sold mainly as toys. There was no place that sold real boards that serious dedicated hardcore skaters wanted. Cal Streets had to get the word out! So we became a distributor, retailer, and mailorder house so that skateboarding could be jumpstarted once again. I wanted the retail entity to be a place where boarders could visit and socialize with other real boarders, not simply sales clerks.

Consequently, with CalStreets REGENERATION as an online entity, I did it not as just another marketing website, I built it to reach out to skateboarders everywhere on a social basis. Trying to equate the great early years of skating for fun with friends as a lifestyle and proving to the masses it can be done. Fortunately I still have all my skateboard memorabilia, as well as all kinds of photos from my· skateboarding days, so I had a base of good material to draw from in building the site. With the astounding success of the site, I know that my original skateboarding concept was a valid one and is appreciated by other boarders. 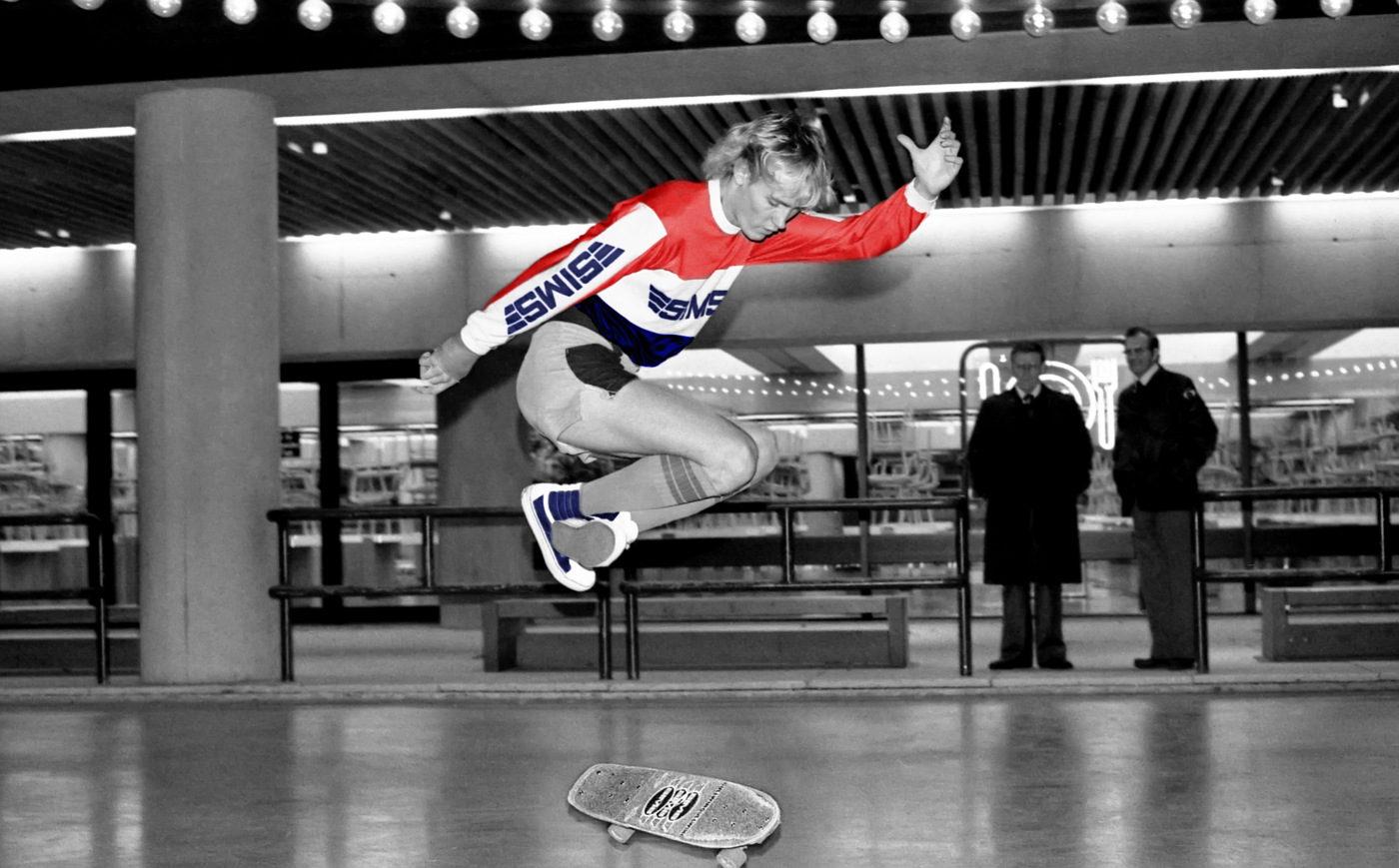 3.. How do you source all the vintage ads?

While working for NorthWest Skateboard Distribution I wanted to know all I could about supplying my market with the best boards for the price and who I needed to know, and how I could connect. I was only 17 while I strategized about opening my new shop so grabbed all the industry mags· I could lay my hands on, and I simply stored them away for future reference. Using Photoshop skills I refurbished 1000’s of vintage skate ads from my era for the CalStreets.com Regeneration.

4.. What is it about skateboarding that interests you so much?

I think it’s the freedom – knowing that you are free to do whatever you are physically able to. Its a very one to one sport, you only have yourself to· blame if you succeed or fail. It’s a very physical thing, its the adrenaline and terror that every real boarder understands. I have been dedicated to skating since I was a teenager doing martial arts, my previous passion, which I still try to keep up with. I don’t want to get all intellectual and talk about it being a Zen thing, but it is in a way. When you are on a board there is only one thing that matters – what you are doing at the moment – and the knowledge that if you allow your mind to stray, you could be courting some serious (and unexpected) road rash, ah yes old school… 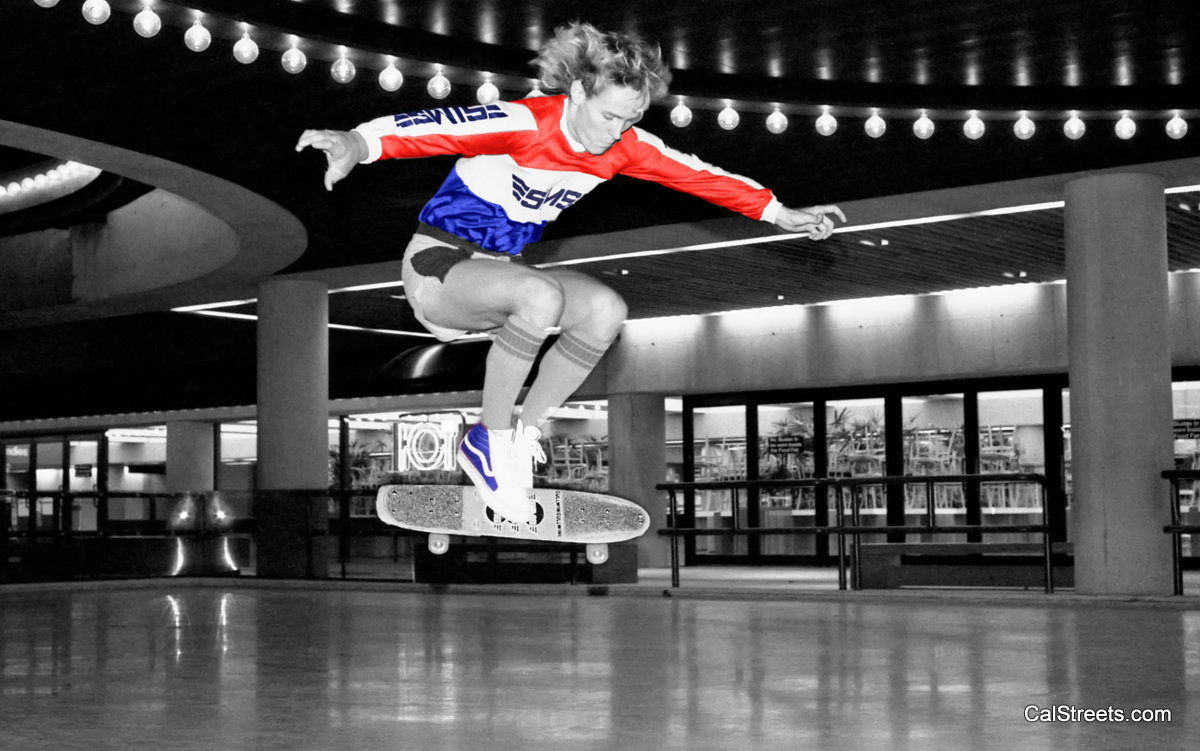 5.. What excites you as a skater these days?

The fact that we’re back! CalStreets.com is breaking new barriers with my passion for longboarding and downhill. Skating is in me again and I really love the new people involved with the Longboard Industry.· It takes me back to the simple times. Another exciting trend is the amazing technological advances that have been applied to skateboard manufacture. I hope to keep skating till I’m 70.

Thanks to Dom Alessio – The Brag Magazine (Arts & Associate Editor) for this great opportunity to spread the word that Longboarding and Freestyle are back!