Steve Caballero was never chosen by the other kids when it came to team sports, but he never let that get in his way. Regardless of his size, he was a giant when it came to heart and competitiveness. It was this drive that pushed this icon of skating, and puts him at the top of most lists of all-time favorite skateboarders. I sat down with Steve and talked about the 1980s, the ramp revolution, Punk Rock, and his perspective on skateboarding today including the downhill and longboard genres.

KH: When you were younger, what were you into?
SC: I definitely was just a really little kid, and nobody ever picked me for anything. I was heavily influenced by Bruce Lee and Evel Knievel. I spent a lot of time reading comic books, and I was into superheroes. I really wanted to be a BMX racer, and was always trying to jump things on my bike or roller skates. Our family didn’t have much, and I definitely didn’t know what a skate shop was. The only stores we shopped at were the local department stores. 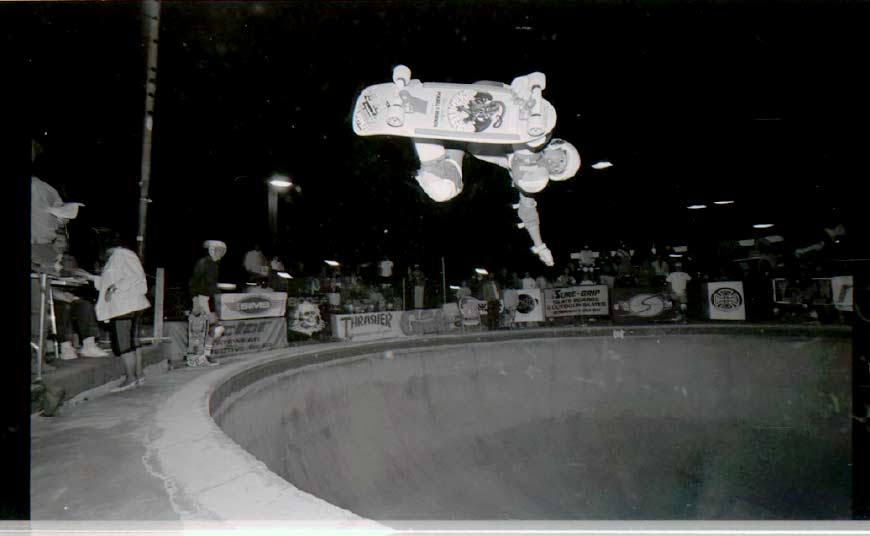 What happened in your life that led you to skateboarding?
I had a skateboard – it was a Hang Ten with steel wheels. My first pro board was a Ty Page Free Former that we got at some local store. I remember my family went to Disneyland, and that was when I learned about The Concrete Wave skate park in Anaheim. I skated it, and remember that it was really hard for me.

Is that what pushed you to start skating more?
Yes, I started to go to Campbell skate park because it was pretty cheap to skate there compared to Winchester. Campbell was about community, and they always had contests there; I think I liked it better because of that. Winchester was a good park, but they didn’t have as many events. It seemed like they didn’t care as much about them and had about one event a year. I was very competitive, so going to as many contests as I could really helped me progress. I started winning contests and getting Ice Cream credits. Then I started winning free passes to skate, and after a while I moved up into more competitive events and started winning products. I fit into the competitions fairly well, and Campbell Skate Park gave me that opportunity. 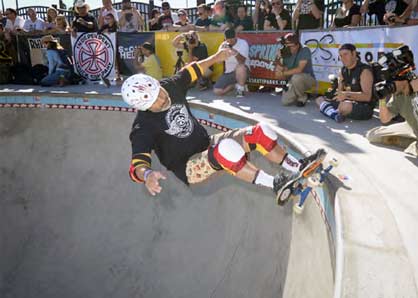 id you meet Stacy Peralta from Powell/Peralta?
I went down to Escondido for the year end National Amateur Competition. I was skating for the Campbell park team. I placed fifth in my division, and Stacy and Steve Cathey were the judges. This was 1979, and afterwards Stacy asked me to ride for Powell/Peralta.

What did you think the skateboarding world?
I had no idea what it was, but to me it was something new and exciting. In retrospect, I think the late 70s were the hay days of skateboarding. There were parks being built everywhere and magazines were coming out. It was an exciting time.

But not long after that, all the parks would disappear almost as fast as they were built. How did that affect you?
We started to search for backyard pools, ditches and even red painted curbs because we knew that the painted ones would be slippery. I think that’s when we were doing the first slappys. I remember when they bulldozed the Winchester key hole pool. I still wanted to skate vert, so I asked my mom if I could build a ramp in my back yard. My friend Naman Poon’s dad funded us, and me, Gavin and Corey O’Brien built it. 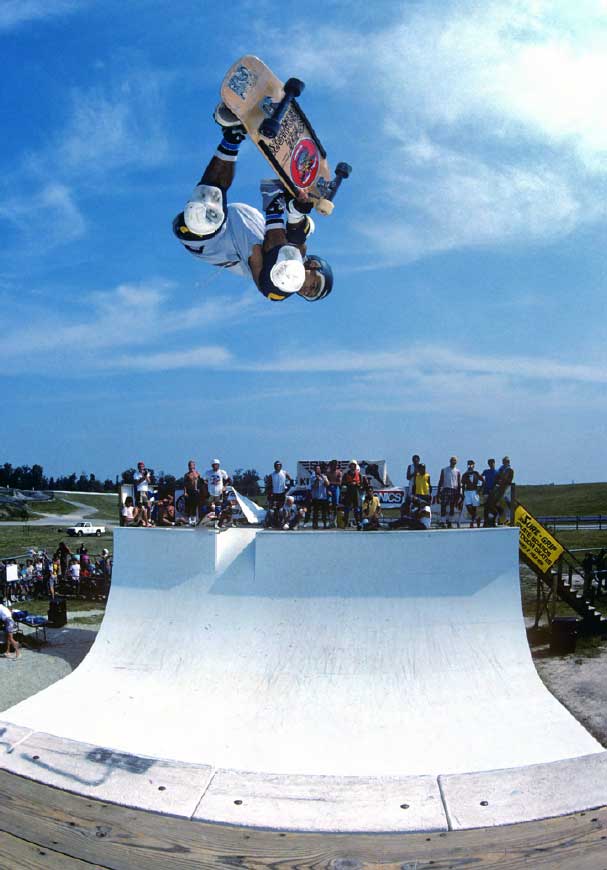 Had you ever built ramps before?
Yes – we got the ideas for our ramp from the magazines articles that were coming out. It seemed like all the mags had “how to build” ramp plans. The parks closing wasn’t going to discourage me.

What was your favorite ramp?
The Chin Ramp. I wish they would rebuild it and have a onetime Legends and Pro event. It would be amazing! The Chin Ramp was only up for four days and we were the only skaters that got to ride it. There were a few more that were lucky enough to experience it, but it was pretty much just the Bones Brigade.

“People always say that their era is better, but I say that right now is the best era because there is so much to skate! “

Back in the 1980s, how did you know what places to skate?
Word of mouth, and what we saw in the mags: Thrasher Spot Check, Action Now and Skateboarder Magazine. Also, zines that would acknowledge spots. We wouldn’t say exactly where they were, or give the real names though.

How did you get into Punk Rock?
Before I got into skateboarding I didn’t care about rock and roll. I was into soul, R&B and disco. When I went to skate parks, that was all I heard. Because I was an impressionable little kid, I said that I wanted to be like these guys. After that, I asked my mom to take me to a music store and I got AC/DC’s High Voltage album.
I thought listening to that music would make me a skateboarder. Eventually I moved on to Gary Newman and The Police, and then Stacy turned me on to The Cars. A dude named Rat’s Ass got us into the Buzzcocks, 999, TSOL, Adolescents and The Dead Kennedys. After that, I just threw away the whole New Wave and Rock ‘n Roll thing. From then on it, was all about hard core Punk Rock.

How did “The Faction” come together?
The Faction was me, Gavin, and Corey O’Brien. We started the band because we were going to so many punk shows. We also created the first Skate Zines covering the whole downtown (San Jose) Punk scene. 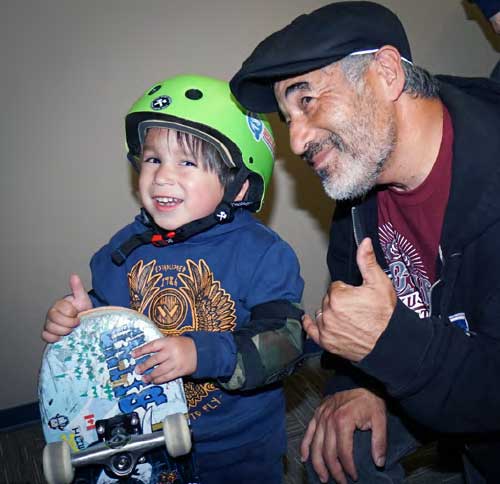 What do you think about it downhilling?
I don’t really think about it much. It’s not that interesting to me, but it does looks fun though. I wasn’t that interested in it then, and I’m not now. That’s not to say that they aren’t challenging themselves or that they aren’t ripping. I like Vert, street skating and parks. It’s not like we didn’t do that stuff. We did! When the parks all closed, we did skate everything and anything we could find. I used to do it in downtown San Jose. There’s actually a shot of me and Lance Mountain bombing downtown and flipping off the photographer.

What do you think about how some skaters talk bad about longboarders?
People are selfish regarding what they’re into. As soon as something blows up, then they say it sucks. I believe in choices, and our choices dictate how our lives go. People always say that their era is better, but I say that right now is the best era
because there is so much to skate!

Who is your greatest influence?
The most important person in my life today would be Jesus Christ! Because of what he brought into this world, we can barely understand through just common sense that which was meant to be understood on a spiritual level. An understanding of life and love that no man can comprehend without full surrendering of one’s pride, ego and limited intellect