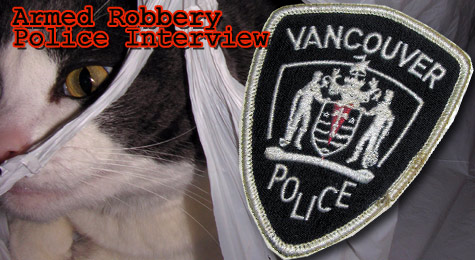 RCMP: Q Dan, can you tell me what occurred today?

A: I am an employee of California Streets and I locked the front door at 5:35 p.m. I then counted my float and removed the remaining cash from the cash register. I sorted the cheques and the cash out and added for totals in Visa and Mastercard. I started to prepare the deposit book and laid out the piles of cash, $100, $50, $20, $10, $5. There was banging at the door and there was some kids that I recognized outside so I thought that maybe this black guy was with them. I saw a black guy and he was the guy that was banging on the door. The black guy was holding up twenty dollars in his hand when I went to the door. I opened the do 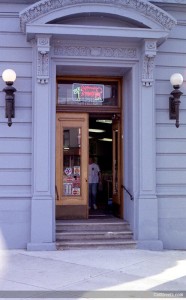 or and said “What can I do for you’? He said “Do you mind if I get something for my kid” I said ‘we’ re closed already, do you have something in mind’.

He forced his way sort of into, the doorway as we talked and he ended up inside the doorway. As he came in the door, I noticed that he had a newspaper under his left armpit. He started looking around on the walls and slowly made his way into the foyer of the store. It was at this time that I realized I would help this guy and I locked the front door. I walked towards the till area behind the employee counter and I got about four or five feet and I saw him pull a gun out from where the newspaper was with his right band. He pointed it at me and he kept on coming closer with it. I kept on moving back and he kept coming toward me. He was saying ‘Don’t try anything stupid’. I’m taking all the money’. I said I wasn’t, I won’t. ‘Yes’, what ever was required for answers to indicate I would help. We got to the back of the employee counter where the cash was laid out beside the till. I didn’t know where the newspaper vent but as he held the gun at me with his right hand, be began to grab the cash of the counter with his left hand. He grabbed the cash up into his hand and said I want all the money. I said “That is all the money.”

He said “Don’t lie to me. Don’t fuckin lie to me or I’ll shoot you. I’m not joking.” That’s when he pulled back the tip of the gun and cocked it.

That’s what really freaked me out and he pointed it over the counter right at my head. When be cocked it, it really freaked me out because that’s when I knew it was a real gun. He said don’t lie to me” I said I. not. He said “I want the rest of the money. I said “Oh yeah because I realized there was more cash for the float in the cash register. The door of the register was closed so I released it. I removed the five’s and two’s from the float, $20 in five’s and 18 in two’s. My hands were shaking and I gave him the five’s and two’s and be grabbed the money in his left hand. He was still holding onto the money from before, he just released a couple of fingers and grabbed the rest of the money into a big ball in his hand. He said “Don’t try any tricks, no fancy stuff, lie down, don’t 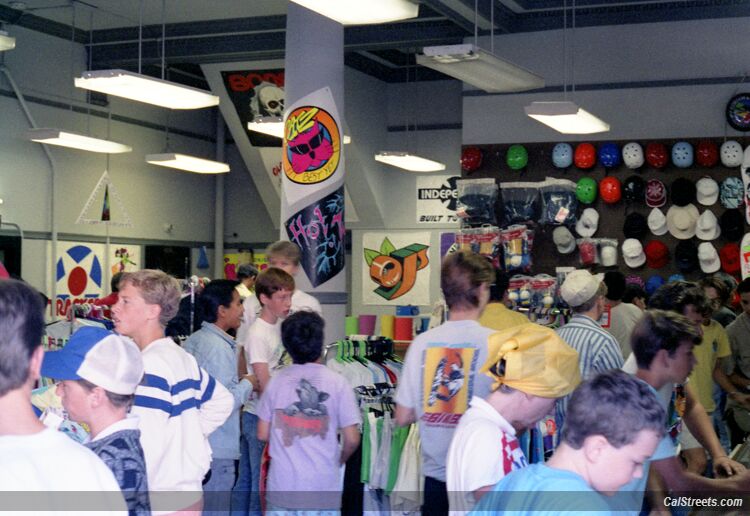 phone the cops or I’ll kill you”. He started to back up, still holding the gun in his hand, aiming it at me. He backed up as he was saying his closing words. Then he said ‘don’t phone the cops or I’ll kill you’. If I get caught, I’ll be back. I told him that the door was locked. He stopped walking backwards and said you’re going to let me out. As I was getting the keys, he moved back towards the door near the pinball machine. I saw him pull down his black nylon pants and watched him put the cash into a loose pair of jeans into the front left pocket. The jeans were under the black pants. I came down with the keys as he was pulling the black nylon pants over the jeans. He held the gun in both hands and I unlocked the door with the keys. I don’t remember what was said now but somehow I ended back inside and he ended up over by the door. Then be said “Back away, move away, lay down, lay down!”. I turned around and he was out the door before I got all the way to the floor.

0: Describe the black male to me?

A: He was very black, male, early 20’s. He was 60” tall, 140 lbs. slight but muscular build. He was wearing a dark colored baseball bat, cheap Blues Brothers style black sunglasses, a red nylon style windbreaker, black nylon pants over top of a pair of faded loose fitting jeans. I could see that he had an elastic at the back of his hair and that it was braided all out from under the baseball cap. The hair was tucked down the back under the collar of his jacket.

0: Was his jacket pulled all the way down to his wrists?
A: No I could see part of his forearms.

0: Any hair?
A: No. The braids on his head would be the biggest giveaway but I don’t remember any hair on his face or arms

0: Describe the gun to me?
A: It was a two-tone grey semi-automatic pistol. The metal top was grey, like a flat grey. The handle was made of hydropilic rubber, no slip rubber. There was no chrome anywhere on the gun except for the very tip of the barrel which was shiny. At a glance it looked brand new, no scratches, very high tech looking.

0: Did it look real to you?
A: Not at first. I’ve been a member of Rod and Gun Clubs since I was a kid. I’ve seen air pistols, BB guns, rifles, C02 point guns and it wasn’t one of these. I’ve never seen a gun like this before. I’ve never handled a real revolver or gun before but when he racked the top back, it sure sounded like it was real to me. It scared the daylights out of me.

0: When he left, what direction did he go?

A: I don’t know, I thought he might have gone west.

Q: Do you know how much money was taken?
A: No I haven’t done the days receipts yet. I would guess close to 2 thousand dollars.

0: How long was he inside the store?
A: Two or three minutes.

0: When he knocked at the door, what were you doing?
A: I was preparing the deposit book.

0: Did he touch any of the cheques or bills that were out on the counter beside the cash?
A: No.

0: After reading this over, is it accurate to the best of your knowledge?
A: Yes.

0: Would you recognize him again if you saw him?
A: Oh yes. That’s all I had to do was look at him and the gun. I saw his eyes through the sides of his glasses.