The Eighth Wonder of the World: THE TURNING POINT RAMP 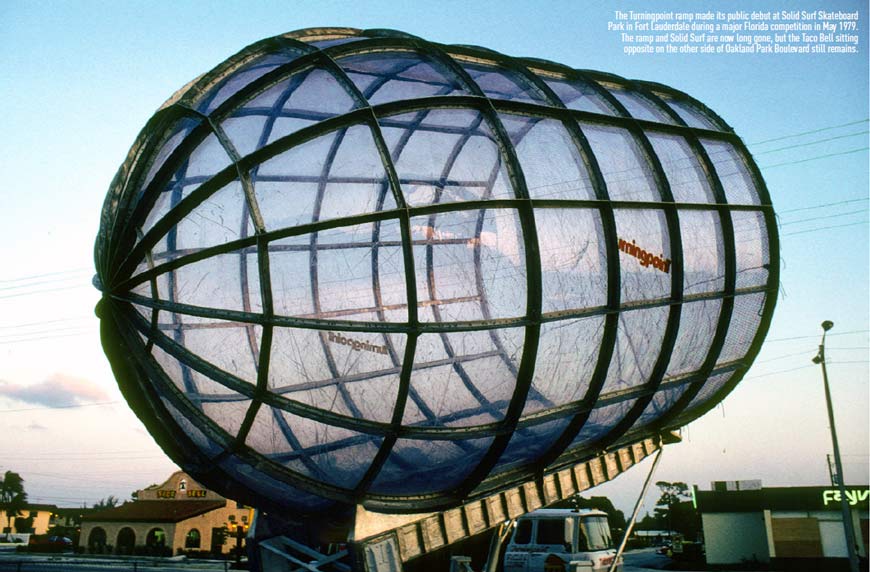 Vert, pool riding and park riding were definitely in vogue as the 1980s began. No doubt, the previously mentioned Alva, Jay, Ollie and many more rippers were inventing new maneuvers on any walls that could be found. Pools were getting gnarlier and larger, but unfortunately, these parks were disappearing almost as quickly as they came about. The park I rode in Florida had two fairly decent pools, one round and one peanut-shaped. We even had a waterslide to attract more customers. Then, out of the blue, and with very little fanfare, a very strange looking, never-before-seen Giant Capsule appeared in the parking lot. I don’t know if I can put into words just how incredible this monolith of skateboarding appeared to me at the time. One thing is certain, no-one had ever seen anything like it. The following is my conversation with the inventor of possibly the greatest skateboard ramp ever made: “The Turningpoint Ramp”. His name is Scotty Senatore. He was not only a very good skater, he was also somewhat of a “skateboarding shaman” who played an integral part in pushing skateboarding to the next level.

In 1979, I was getting the feeling that the skate park boo 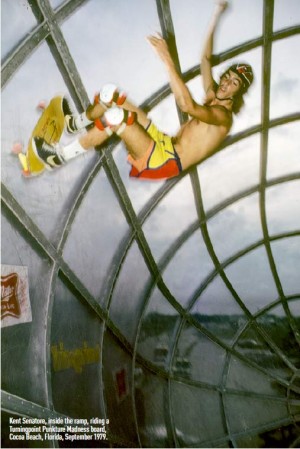 m was losing steam. What is your feeling about that time, and about skate parks in general?

They weren’t designed by skaters. Back then, you had to pay to get in to all the parks, good or bad. They were poorly run and no-one knew what they were doing. The owners were only in it to make money, and to most of them it was a get-rich-quick scheme. The owners were greedy!

What was the inspiration for the building of the Turningpoint Ramp?

A few ramps already existed, and I rode for Vans who had a plexiglass ramp. Firestone had one too. One day, I was approached by a major basketball team to build a ramp that could be moved in and out during halftime of the games for entertainment.

Why the capsule shape?

The capsule idea was so that a person could ride the ramp like it was a long pool with a dome at the end. It would then have a variety of applications including a half pipe, full pipe, or oval for going over vert or doing loops.

But no-one had ever done loops before?

In my mind, it seemed like it was inevitable that someone was going to go upside down. I was going for something no-one had ever done before, but I knew it had to be possible.

How was the TP Ramp funded?

My mom’s boyfriend was the President of the team and I was the VP. He had to launder money that he was making from dealing drugs, so that’s where the money came from. He was part of a group of smugglers from back East that worked in South Florida. They were also involved in a skate movie called “Skateboard Madness”, and they wanted to include the Turningpoint Ramp in the movie. The movie originally was going to be a documentary on skateboarding, but ended up being fictional and the ramp was only in the final scene. It was spectacular, so they saved it for last. Unfortunately I got sucked into all of this.

Can you tell me more about the construction of the ramp?

My mom’s boyfriend went overboard on everything. I wanted it to be made of plexiglass and steel so that it wouldn’t be too expensive, and easy to take apart. Instead, he made it out of lexan and aluminum. It ended up being very expensive and hard to make repairs or get replacement parts. I got into arguments about the construction, and really they made it too good. I wanted it to be less expensive, so that it could be 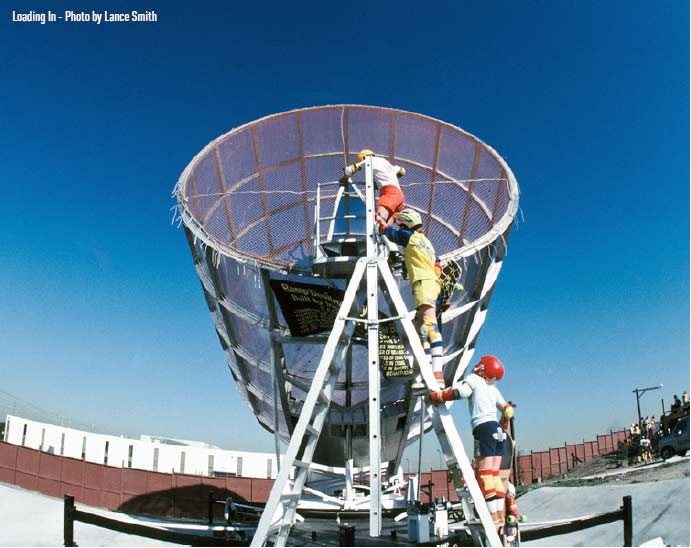 mass produced. They made it bullet-proof and it didn’t have to be. But it worked! Even the hydraulics worked, but not the way I wanted. The ramp was designed so you could go beyond vertical, creating weightlessness. I didn’t want there to be any limits to what you could do. It definitely did all of that, but financially, it just wasn’t feasible.

How did the TP Ramp ever get to Solid Surf Skatepark in Ft. Lauderdale?

My mom lived in Ft. Lauderdale, and her boyfriend who funded it also lived there. Bob Spence’s Solid Surf was the logical place to park the ramp because it was the best skate park in Lauderdale. Also, the filming of Skateboard Madness was going to be done around there.

That was a really fun time, and also a time of change in society. I remember you getting me in to The Police and punk rock.

It definitely was. Kent (my brother) and Jerry Valdez brought punk rock music to me from England. They got turned on to it when they were over there riding for Arrow Skateboards with Tony, Jay, Hackett, Paul Constatineau. That was before Turningpoint got real. 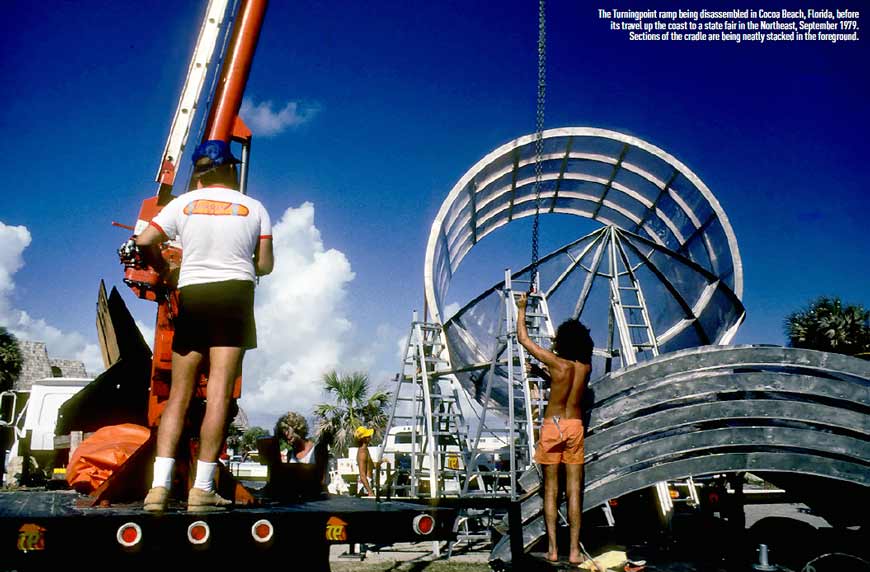 Who did the first full loop on the ramp? Who else stood out in your mind?

Kent Senatore, my brother, was the first to do it. Kent and Jerry would do doubles in the ramp. Jerry had it down really soon after Kent. Other guys who ripped the ramp were Brad Bowman, Steve Lippman, Jim “Graystoke” Gray, Steve Caballero and, of course, Tony Hawk.

What happened to the Turningpoint Ramp after that?

We went on tour with it up the east coast of the U.S. doing demos from Florida to New Jersey. Then it ended up in the Marina Del Rey skate park in southern California for a while. Not long after that, my mom’s boyfriend was indicted for drug trafficking and they had to sell everything, including the ramp, piece by piece. I heard the capsule end is now a greenhouse in Washington state. 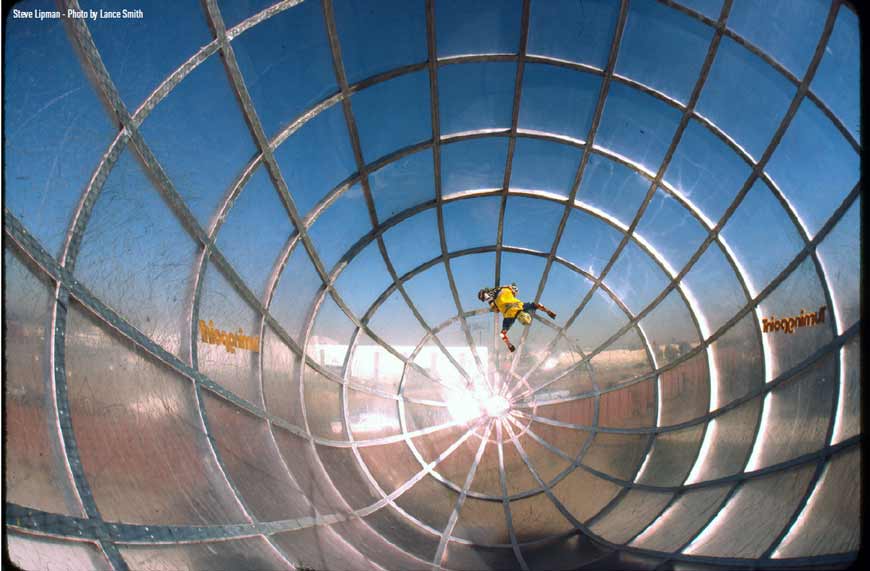 What was the greatest compliment you ever received regarding the TP Ramp?

That would definitely be Shaggy from Grindline. I was contacted by the people building the skate park in Maui where I live now. They had contracted Grindline to build the park there, and introduced me to them. Shaggy told me that the cradles that they implemented into their designs were all inspired by my Turningpoint Ramp. I thought he was bullshitting me, but he certainly paid me a compliment. He said they wanted to make a cradle here in Maui, and he wanted me to check out the design on Facebook. I didn’t know that cradles were being designed into parks because I have been isolated over here in Hawaii for 20 years. Shaggy said that my Turningpoint ramp was the inspiration for all of them. 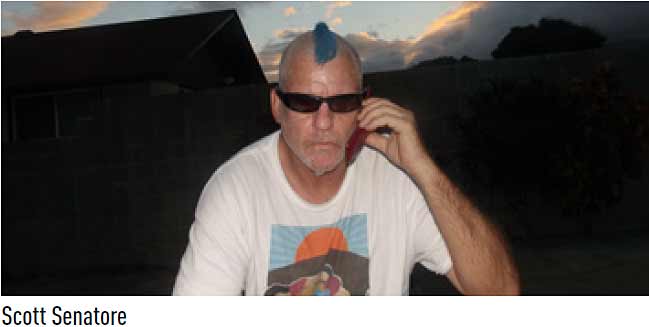 A few things have happened to my visionary friend Scott Senatore. No doubt his incredible creation was the first ramp of its type ever built, and was far ahead of its time. It ushered in the building of many ramps in the 1980s and is a part of skateboard history. Neither Turningpoint or Scott got any credit in the movie “Skateboard Madness.” Scott drifted away from skateboarding for quite a while after severely cutting his wrist in an accident. Now, he rips on a regular basis over in Hawaii and is one of the over 50 year-old skaters who do.

Photos by Craig Snyder (unless otherwise noted) From A Secret History of the Ollie by Craig B. Snyder (Black Salt Press, March 2015). Copyright © 2015 by Craig Snyder. All rights reserved.