Tony Mag: The H-Street Skateboard Company was formed in 1986 by myself and my bro Mike Ternasky. We hooked up with industry leader George Abuhamad to form the first skateboard company that was run by skateboarders. Inspired by Powell’s success in making skateboard videos but without any large film budget available, we theorized that one might be able to make skateboard videos with cheap VHS cameras and edit them at home on VCRs. This was the first basic home video equipment available early in the ’80s. We also sought out some of the most innovative skateboarders of the time, like Ron Allen, Danny Way and Matt Hensley.

One summer later, the video “Shackle Me Not” was born and would change the way that skateboard videos were made from that point on. A year later, Louisiana swamp rat Sal Barbier was added to the team, along with Alphonzo Rawls and several other top skaters of the day, and the video “Hokus Pokus” was made, which would take the world by storm…together with “Shackle Me Not,” the videos became some of the most watched skate videos. H-Street would eventually produce five major videos, with such notable skaters as Matt Hensley, Danny Way, Ron Allen, Eric Koston, Mike Carroll, Jason Rogers, Colby Carter, John Schultes, Chad Vogt and many other top pros of that era. We also produced a host of innovative and original skateboard products, most notably my Hell Concave, a board with an extreme amount of concave, even throughout the tail and nose. 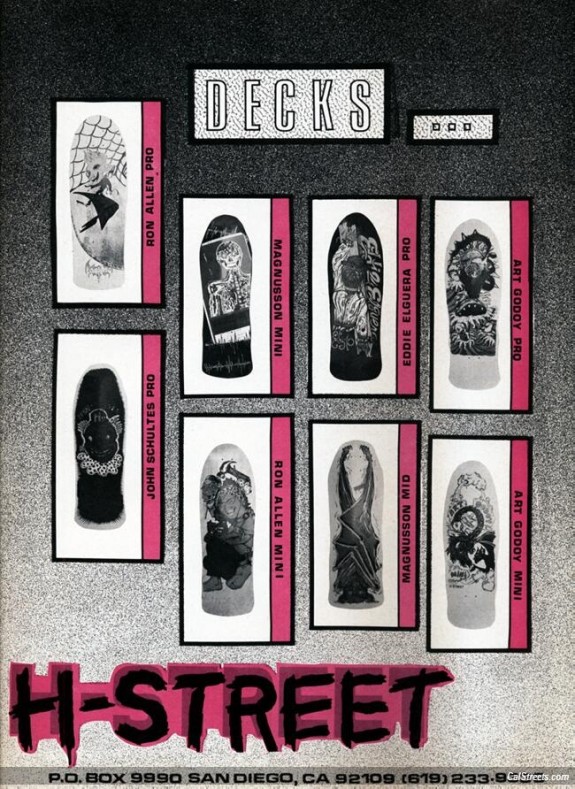 What were some of your decisions to bring H-Street back?
For one, people in general have asked me to do it for years and I just haven’t had the time, but more importantly, I think that skateboarding is entering a new time, where not only is there an appreciation for old-school brands but also a need for new brands that can step out and offer something that’s different than what has become a pretty basic play: a couple of skaters start a company, get the best riders they can, make only one shape in a few sizes, advertise, make a video, take the team on tour and figure out how to keep them from partying too much. While H-Street was largely responsible for creating this idea that anyone can start a skate company, I think it’s time to step out of what has become a cookie-cutter formula for doing it, too. Having different brands that do different things is a good thing, and I’m looking at remaking H-Street into something that might be a bit different, in many ways.

What do you think were some of the biggest accomplishments of H-Street?
To me, the biggest accomplishment was that we inspired people. I have had so many people tell me over the years that H-Street was an inspiration to them to pursue a dream, whatever it was – start their own skate company, leave a shitty job and become a skate photographer, an artist or whatever. It’s a little-known fact, but I get told that all the time by strangers. It’s also been one of the greatest joys in my own life and has taught me a level of humbleness and appreciation that I don’t think I would have learned otherwise. Of course we didn’t know that would happen at the time, nor was that even an objective. But life has a way of working out in mysterious ways. Positive energy, baby.

Of all the memories you have with the brand, what sticks out in your mind as being the most incredible and unusual?
There are so many memories, it’s almost hard to single something out. Watching guys like Danny Way, Matt Hensley and Eric Koston grow up and see their God-given talent develop them into some of the most amazing skaters ever was like watching art in motion. Watching everyone else grow up with skateboarding and H-Street was also pretty amazing. The number of stories and tales from the H-Street days seems almost limitless, and I’ll be trying to reflect some of that magic on the site, H-Street.com, and perhaps in the DVD set of all the H-Street videos, due out as soon as I have some time to make ’em.

What are some of your expectations?
None whatsoever. H-Street is now just a source of joy for me to work on. I’ve been able to reconnect some amazing people, starting with Ron Allen, and together we’ve come up with some really pretty cool concepts for H-Street. I don’t expect that people will like what we do but instead, I will have an appreciation for those that do.

You’ve brought out a wide variety of sizes and shapes. It seems like you want to appeal to many different types of skaters; any comments on this?
I believe that skateboarding is for everybody. I’m just not into the whole class warfare [of] who is cool enough to ride; let everyone ride and create as large a tent as possible. Using that philosophy, I’d like to create products for a variety of different types of riding.

Any final comments?
Only The Faithful.