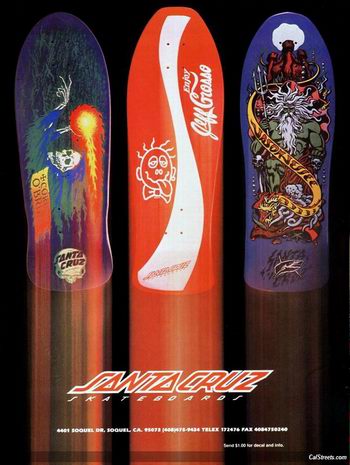 Into the 1980s, NHS morphed into Santa Cruz Skateboards and became a powerhouse assembling a Murderer’s Row of top vert skaters that included Keith Meek, Jeff Grosso, Jason Jesse and Rob Roskopp. Well, that caption sucks, according to Tim Piumarta: “As to your ‘Murderer’s Row:’ you totally miss the point. NHS never ‘morphed’ into anything. NHS has always been NHS.

Santa Cruz Skateboards was a powerhouse in the late 70’s with John Hutson dominating prestigious slalom contests in the USA, and Hutson and Goldman winning Signal Hill. Santa Cruz didn’t morph somehow out of something else in 1980.

Yes, Santa Cruz later became a powerhouse once more in bowl contests with Duane Peters and Steve Olson, then Steve Alba, ·then later in the 80’s with bringing on Rob Roskopp, then Jeff Kendall and Micke Alba, then Jeff Grosso and then finally Jason Jessee. These didn’t hit all at once, as if we went to WalMart and made a bulk buy of talent. ·Each one came in at a different time, and each took their own path in their development. Frankly speaking, any accounting of the Santa Cruz story without mention of Jeff Kendall, is engaging in revisionist history.

Arguably, Santa Cruz took off at the same time we acquired Natas Kaupas and Santa Monica Airlines and bringing in Christian Hosoi.  Speed Wheels were the mid-80s incarnation of Road Rider wheels, but the brand needed a logo. Santa Cruz artist Jim Phillip’s right hand looked at his left, and a lightbulb flashed. “Hands in art can show emotion,” Phillips said. “When you’re drawing a drowning man, you draw a hand coming out of the water.” An open hand is friendly. A closed fist is angry. For Speed Wheels, Phillips came up with a very emotional severed hand with teeth, silent screaming, in blue. The logo was eerie and gory and intense and disturbing, but it became one of Phillips’ and Santa Cruz Skateboards’ most enduring graphics. A May 2002 issue of Thrasher Magazine paid tribute to the Screaming Blue Hand: “With a blood-stained compound fracture, flapping tendons and misplaced mouthpiece, this aggro amputee became one of the most recognizable skate logos of all time.” Boards courtesy Santa Cruz Skateboards.