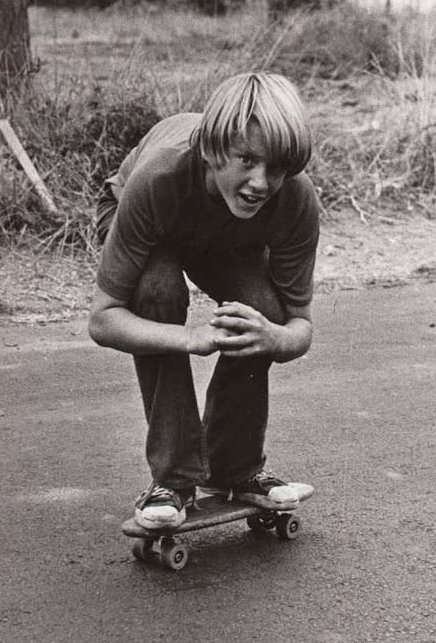 Cred is important in skateboarding,so let me establish mine. I began skating when I was ten in sunny California around 1970, in the bad old days of clay wheels. I also started surfing about then, walking with my purple Haut longboard every day from Santa Cruz’ Seventh Avenue to Cowells, and putting in the time to learn the secrets of the sea and suffer the slings and arrows of learning to surf. In California in the 1970s, surfing and skateboarding went hand in hand: if you surfed, you skateboarded.

Ben Marcus, circa 1975, styling on a Hobie Super Surf with composition wheels in good old Santa Cruz, California. In school they would sometimes show surfing and skateboarding movies, and that’s where my friends and I were introduced to SkaterDater. For our generation, it was a life-changer.· Here were a bunch of skater kids going berserk over a movie about other skater kids. My friends talked about SkaterDater for months later— about how cool it was that these kids could hop curbs without their feet leaving the board.····· Look for Ben’s latest Book “Skateboard”

I feel lucky to have grown up in Santa Cruz at that time, in part because I was around for the transition from clay/composition wheels to urethane wheels. This happened around 1973, and like everyone who read Surfer magazine, I was mesmerized by images of Gregg Weaver with his long blond hair, contorting himself into positions on his board that were scarcely to be credited. Although the photos were stills, it was obvious that Weaver was hauling ass on his board, and torquing the wheels into positions that would surely have resulted in· crash on clay wheels.

Clay wheels were Flintstones’ technology; urethanes were pure Jetsons—the future. The wheels whirred like a spaceship, and made you feel like you were barely in contact with Earth’s surface. It’s hard to appreciate just what a big deal urethane wheels were, but my friends and I went nuts—as did the skateboarding world. My buddies Alex Johnson, Michael Duffy, Danny Ford, David Wampler, William “Winki” Thurlow, and I skateboarded all over Santa Cruz. There were long hedges to duck under for tube rides and lots of sidewalks leading up into driveways where we could do flowing, swooping, 1970s-style surf turns. It was simple fun, but it was fun. The best skater in our bunch was Kevin Reed, arguably the most innovative surfer-skater around Santa Cruz at the time.· He was tall, thin, and about twenty years ahead of his time. I remember him skateboarding a drainage ditch that some called the Pit and others called the Dip, depending on what side of town you were from. He was fast and graceful and made it look good. 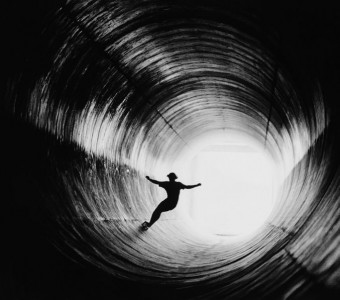 At some point, I helped Kevin finish a high school history paper, and he returned the favor by taking a photo of me riding one of his King Kustom Kazar boards with Cadillac Wheels, skateboarding a place on the west side of town called Liptons, because it was right across from the Lipton Tea factory. Somehow that photo ended up on the back cover of one of the first skateboard books of the urethane era, ·Anybody’s Skateboard Book.

I graduated from high school in 1978, and that’s pretty much where skateboarding ended for me and a lot of my friends.· As I researched this book and talked to other skateboarders, that seemed to be the pattern. You start skateboarding as a kid, get really into it as a teenager, have a blast with your friends through high school, and then all that enthusiasm is dispersed after graduation—by college, commitments, age.

My skateboard cred starts to fade after the 1970s, even though I worked at Surfermagazine for ten years, most of that with Steve Hawk, brother of· Tony. ·At some point in the early 1990s, I visited Tony’s house in Fallbrook, where he had an epic backyard ramp set up. It was then that I witnessed firsthand how far skateboarding had come.

Bucket Brigade at Buena Vista pool out near Watsonville, in the 1970s. That pool was recently uncovered and has gotten more ink than a San Quentin lifer. Danny Digirolamo

·I’ve written nine books on various aspects of surfing, but this book is by far the most difficult and time-consuming book I have ever done. I knew I was in trouble when I walked into Larry Balma’s barn in east Oceanside and saw the hundreds of skateboard magazines and industry journals he’d collected and carefully saved over the years. If I sat there for four years I don’t think I’d be able to read it all.

But I pushed on, piecing this book together from books, videos, and online articles, and interviews with dozens of people, from 1940s skater Carl Knox to the Sector 9 guys at an ASR show today. Of all the resources I used for this book, two of the best for IDing skateboards were the Disposable books by Sean Cliver and www.artofskateboarding.com. 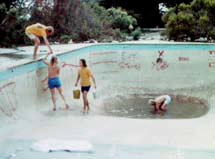 All told, there were probably twenty thousand distinct skateboard decks that have been made since the late 1950s. This book isn’t meant to identify the provenance of every·deck, wheel, truck, and accessory ever made, but to detail the “arc” of skateboarding—if· I can use a Hollywood term—and highlight the most important people, events, boards, and··innovations to show how skateboarding, began as a crude sport invented by surfers in the late 1940s, became a multibillion dollar industry and sport practiced by millions around the world. Perhaps even more importantly, this book celebrates all that simple fun my friends and I had skateboarding.